Neuschwanstein Castle – The Very Best of the Alps 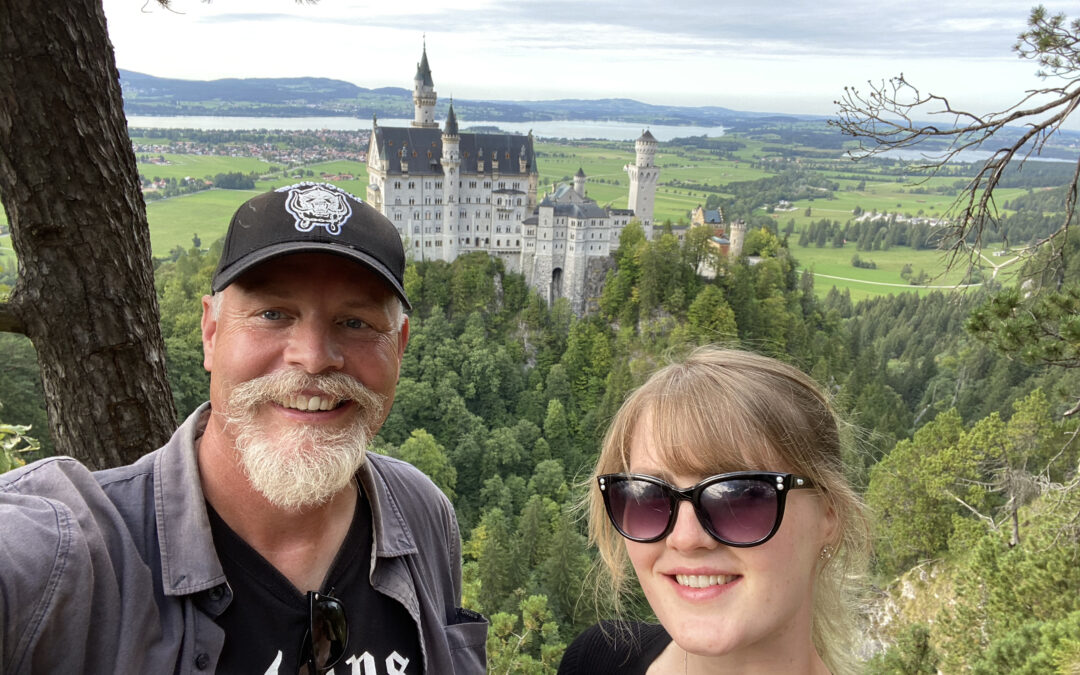 This bizarre castle, built on the side of a mountain in the middle of nowhere by a strange man-child caught up in medieval fantasies, always delights travelers fortunate enough to get out to this corner of the Alps.  And I’ve taken hundreds of them, if not thousands (I stopped counting a long time ago) here.  In 2020, when I had no groups to lead, my daughter Kasmira and I found ourselves in Europe researching our Very Best of the Alps trip.  And she suggested adding a stop at Neuschwanstein to the tour.  Why not?  It’s in the Alps, requires a bit of hiking to get to, and is close to the beautiful bavarian town of Fussen, where there’s great food and drink to be had. 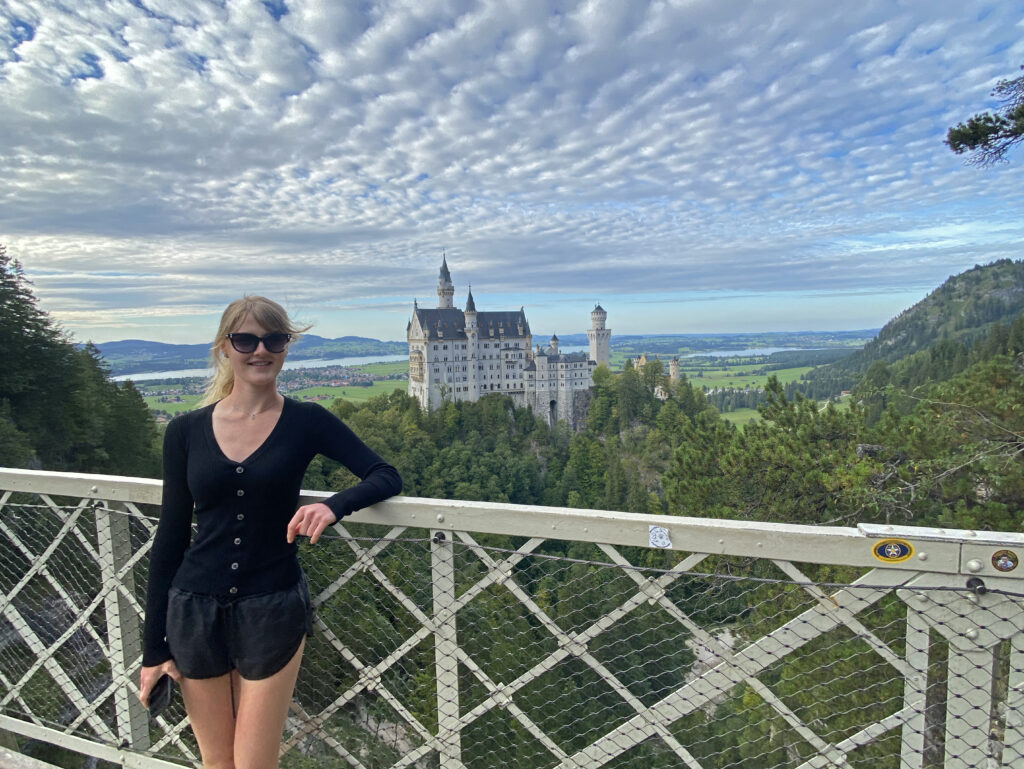 Kasmira on Marienbrücke (Mary’s Bridge) ready to hike up into the mountains behind Neuschwanstein after our visit inside.

Not a “real” castle from the age of castles, but a pleasure palace created out of the fanciful imagination of King Ludwig II of Bavaria (and the taxes of the Bavarian people) on the cusp of the modern era, this is nonetheless probably the most recognized castle in the world.  Despite the fact that Ludwig only got to live in it for a short time after its completion on September 5, 1869 (my birthday, by the way! – well, different year) before being arrested by the Bavarian State Police and sent to a lakeside asylum (where he and his psychiatrist mysteriously drowned), the inside of this castle has a tale to tell.  To go inside you must book a timeslot and go with a guide.  They take you through the “finished rooms” (much of the castle is unfinished inside, and the Nazis stored stolen art in the unfinished rooms during WWII), including the Singer’s Hall (basically a private opera house for Ludwig and his guests), the Throne Room (throne never installed), and the drawing room filled with dozens of artistic representations of swans (part of the name of the castle in German – “new swan stone”).  Photos are not allowed inside, so I just pulled some from wikimedia commons, because I would never break the rules and take photos where they’re not allowed. 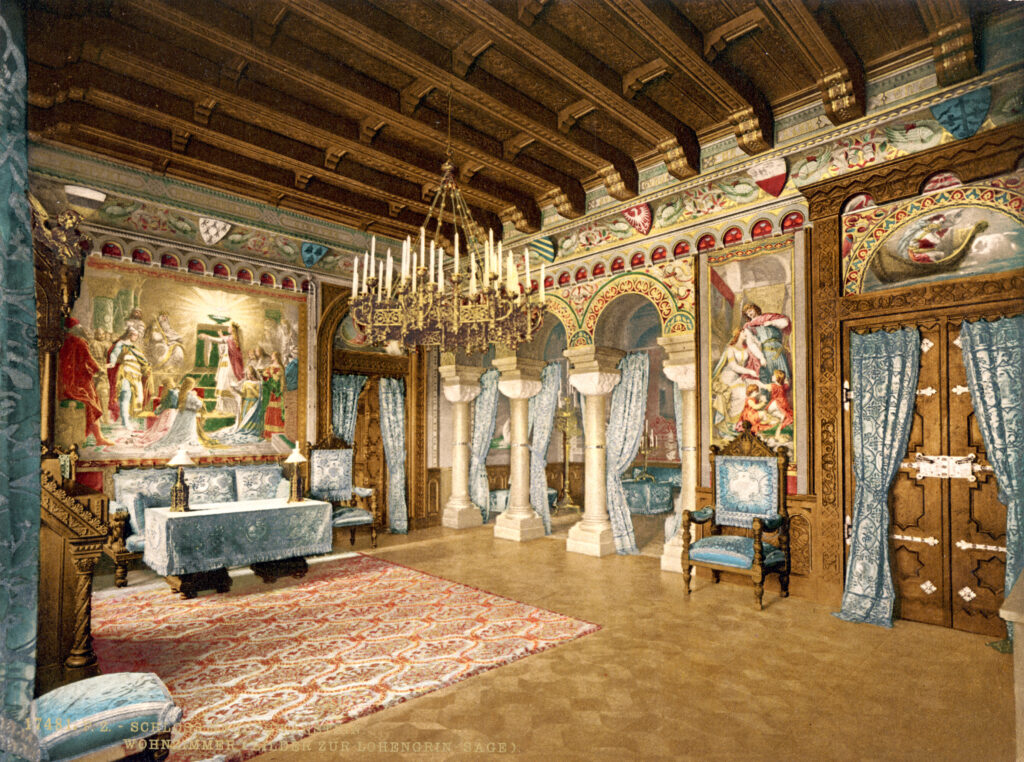 The drawing room (what we would call a “living room” in a normal house). The swan motif is everywhere, but it’s hard to find them in this picture. You’ll see them all when you visit the room in person. 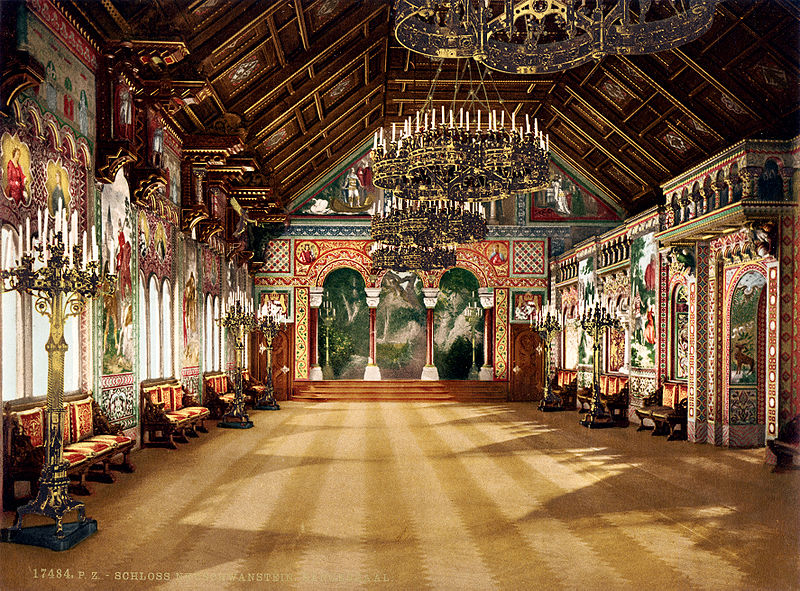 The Singer’s Hall – they actually put on small concerts here from time to time today. I haven’t got an invite to one yet… 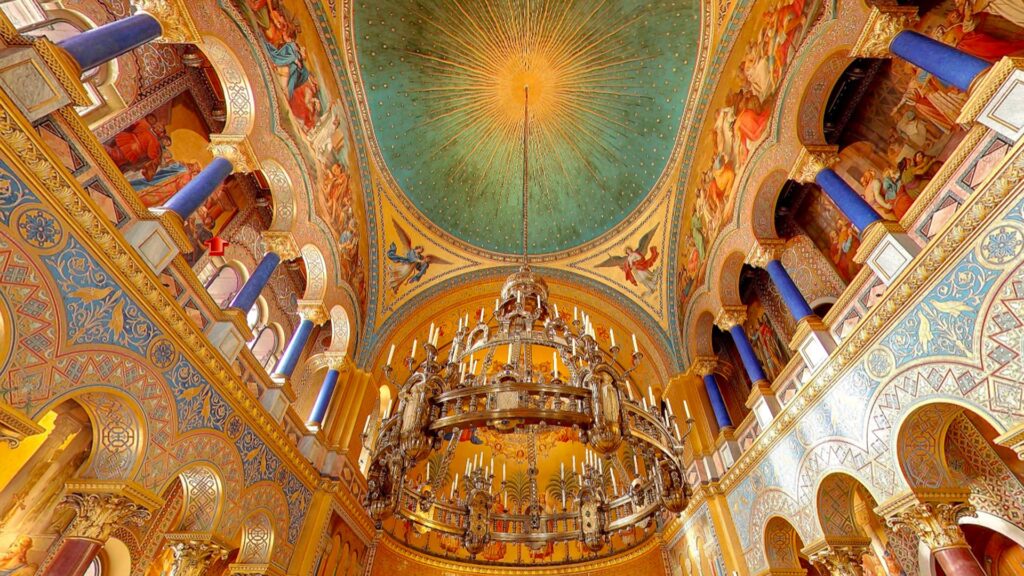 The amazing multi-ton chandelier hanging from the ceiling of the throne room. It is meant to evoke the crowns worn by Holy Roman Emperors in days gone by. 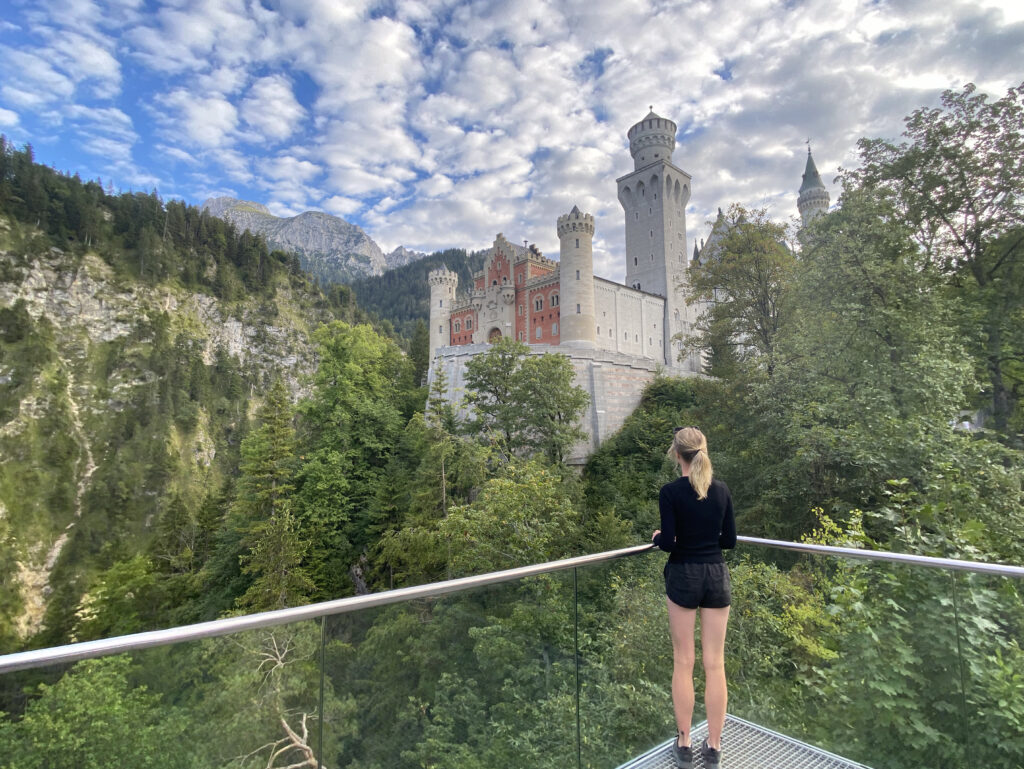 One last look at Neuschwanstein before we descend to the valley below.

After visiting the Neuschwanstein Castle for the 25th(?) time (again, who’s counting) and hiking up the mountain behind, we descended to the base where Ludwig’s old castle, Hohenschwangau sits.  In all my years visiting here, I had never been inside the little yellow castle – and now without a group or any time constraints I got to go in!  It’s beautiful inside!  But again, no photos allowed. This is where little Ludwig grew up. 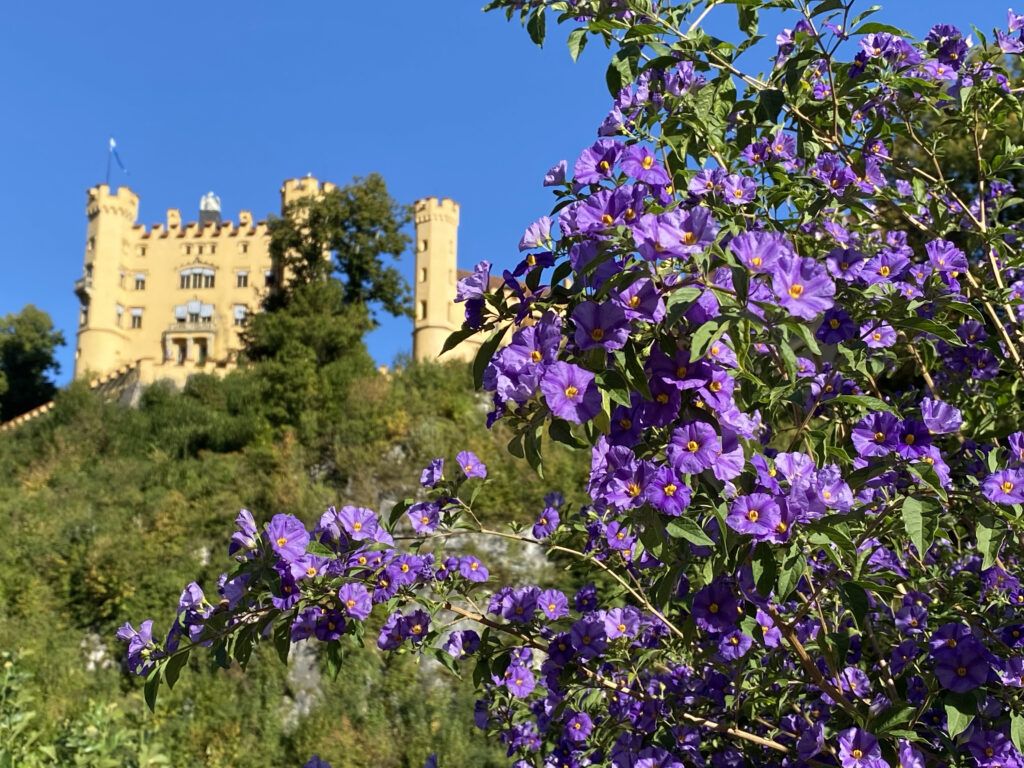 Most of the time when I visit this area it is March and the gardens aren’t in bloom. Different story in the summer – gorgeous gardens – some wild, some manicured, surround Hohenschwangau.

After the castle visits, we headed into Fussen to our nice hotel and walked down the pedestrian streets to find a restaurant (Kasmira found a restaurant with a micro-brewery in it for me!). 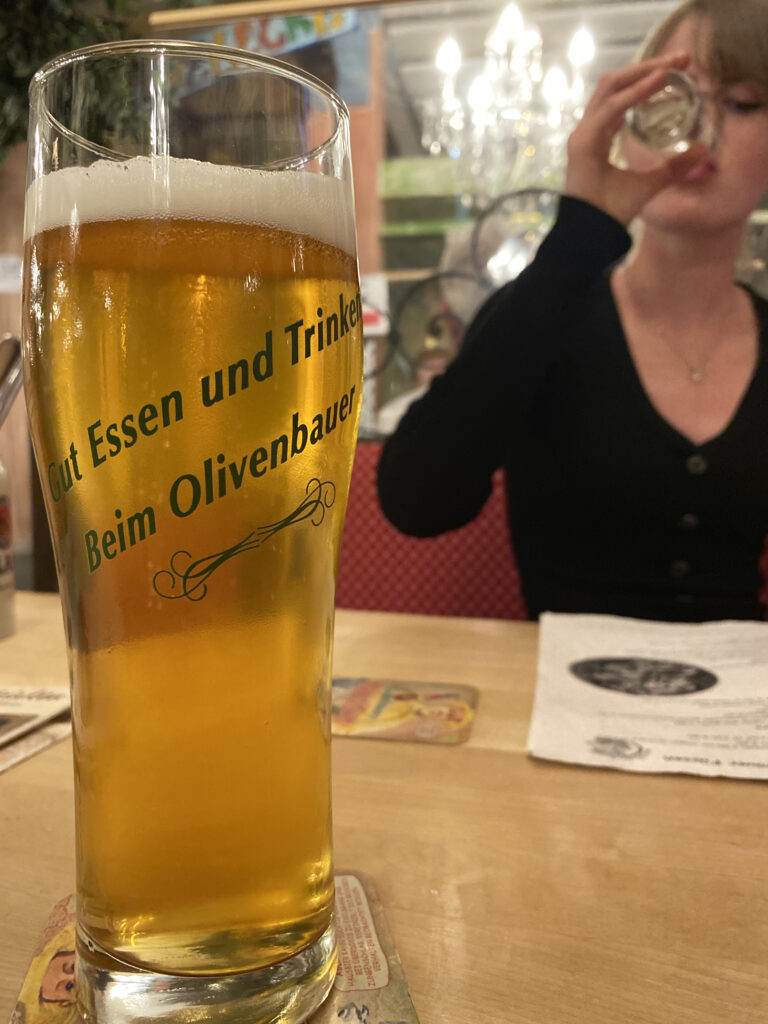 Beim Olivenbauer was filled with locals – I think we were the only people not speaking German. Then again, it was August 2020, so not a lot of people travelling… Great food, and excellent home-brewed beer! I really only care about the beer. 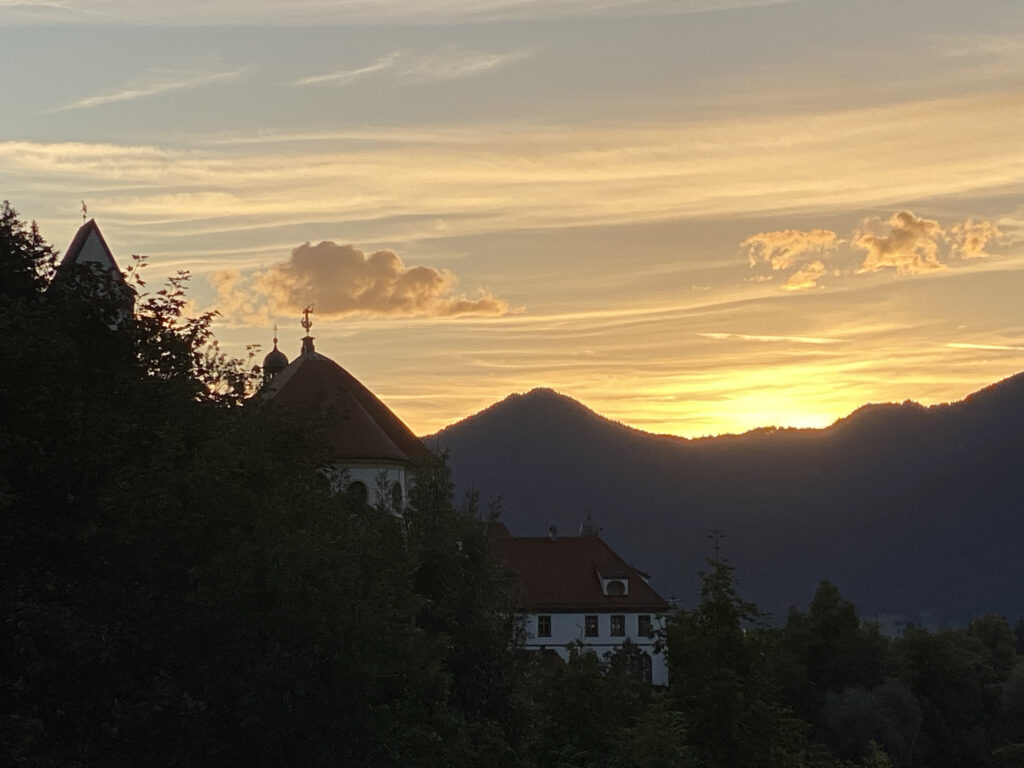 The end of another beautiful day in the Alps…. 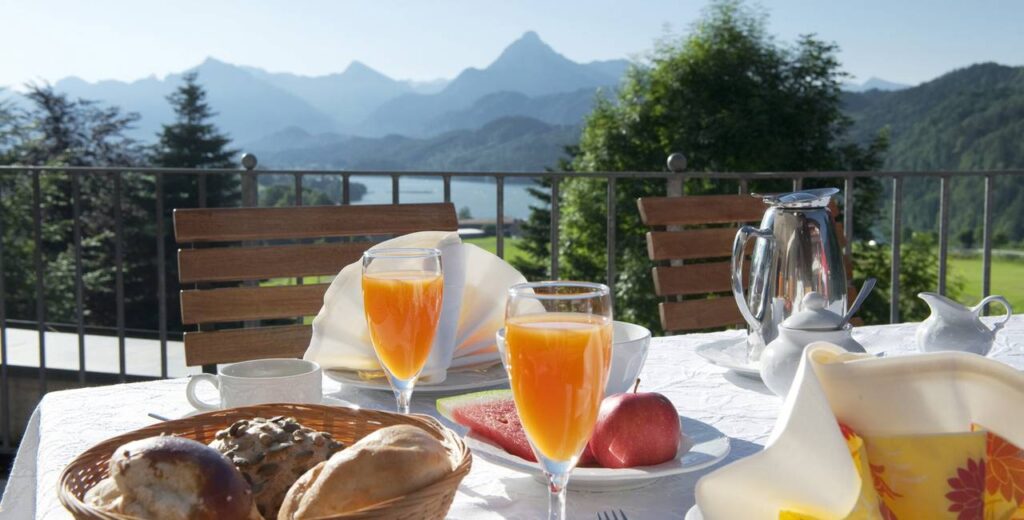 …and the start of another beautiful day in the alps with breakfast on the patio of our lovely hotel! The adventure continues…